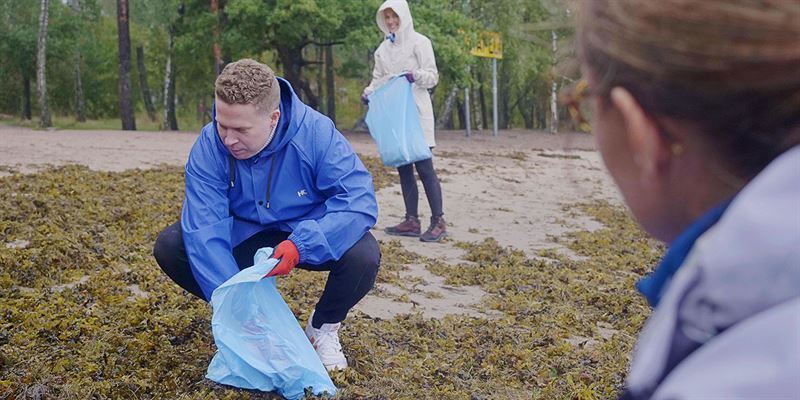 Kiiltonians participated for the first time in the annual Baltic Sea Day, organised by the John Nurminen Foundation. Our employees in several countries removed litter from the Baltic shores and launched a social media photo challenge for the good of the sea.

The Baltic Sea Day event, organised by the John Nurminen Foundation, is held every year on the last Thursday in August. The aim is to increase awareness of the Baltic Sea and its condition, and to encourage people to enjoy the sea and take action to benefit it. Kiilto’s collaboration with the John Nurminen Foundation began in early 2021, marking the first time Kiilto participated in the Baltic Sea Day. The collaboration is also closely connected to Kiilto’s Promise to the Environment.

“Taking responsibility for the environment is one of the cornerstones of Kiilto’s culture and part of our daily work. Almost all the countries Kiilto operates in are by the Baltic Sea or its catchment areas. By participating in the Baltic Sea Day, we wanted to celebrate the sea, which belongs to us all, to highlight important environmental concerns, take environmental action and encourage others to do the same,” says Kiilto’s Executive Assistant Tiina Niemi.

Kiiltonians picking up litter on the Baltic shoreline

Among the Baltic Sea Day events for Kiiltonians was litter-picking in the countries where Kiilto operates. Kiiltonians took part in Finland, Russia, Estonia, Ukraine and Poland.

The rainy and windy weather on the day didn’t bother them. The consumer business team from Kiilto’s Helsinki office headed to the Lauttasaari district of Helsinki for the afternoon to pick litter on the shore and jogging paths. Kiilto’s Head of Marketing Kaisa Tuppura, who organised the litter-picking event, was pleased with how the afternoon went.“Our office overlooks the Baltic, so we see it every day. We thought that for Baltic Sea Day, we want to be close to nature and the seashore, and pick up even the small amounts of litter that lie in the path of outdoor enthusiasts and joggers. It was great to see how excited the whole team was to participate,” Tuppura says cheerfully.

One of the litter-pickers was Kiilto’s Brand and Communications Trainee Thomas McGinley, who moved from Washington, D.C. to Finland two years ago to study.

“I love swimming, and I’ve just gotten used to swimming in open water without going to the sauna afterwards,” he says with a laugh.

“It’s great that Kiilto has joined forces with the John Nurminen Foundation to benefit the Baltic. Caring for the environment is an important part of our strategy, and we want to make good on Our Promise to the Environment every day. This is one reason why we are proud to be Kiiltonians,” says Tuppura.

To spark a wider discussion on the condition of the Baltic Sea, Kiilto also launched a feel-good photo challenge on social media. By participating, people were able to increase Kiilto’s annual donation to the John Nurminen Foundation. The challenge involved posting a photo on social media of things like a Baltic-friendly meal, swimming in open water, collecting litter or some other nature-related activity with the tag #kiiltoforthebalticsea. Thanks to the photo challenge, Kiilto will donate 5,000 euros to the John Nurminen Foundation in addition to the annual donation.

“Our photo challenge was very popular, and we were happy to see how many people were ready to roll up their sleeves and take action for the Baltic Sea, for example by picking up litter in their neighbourhood,” says Kiilto’s Communications Manager Satu Makkonen.

Our Promise to the Environment helps customers achieve environmental goals