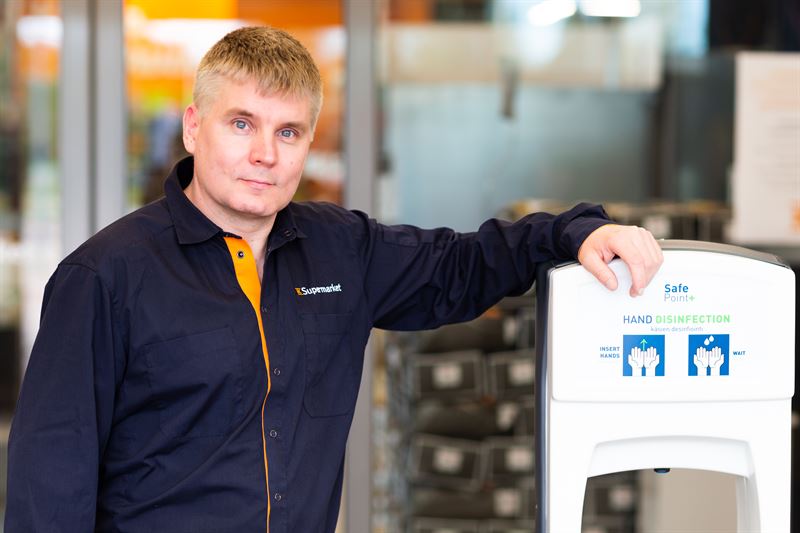 Kiilto has introduced its SafePoint+ hand disinfectant dispenser. The dispenser is a Finnish innovation, and its production is a significant source of employment. The materials and parts of the appliance come from Finland and the machine is manufactured in JKR Muovi’s factory in Finland.

The SafePoint+ automated hand disinfectant dispenser by Kiilto was developed during the coronavirus pandemic on a tight schedule. Its external design is based on the first version of the device, which was designed ten years ago.

“Due to the pandemic, we realised that the product created ten years ago spurred interest and it was time to upgrade it. It is important for us to think about how we can help our customers when it comes to safety and cleanliness. Good hand hygiene is very important”, says Kiilto customer relationship and development manager Mikko Eskola, who was responsible for the launch of the device.

The automated hand disinfectant dispenser was developed specifically for use in public spaces with many users. It is an effective aid in the effort to disrupt infection pathways during the pandemic.

“The device has been updated technically for the current decade, and its automated components have been renewed completely”, says JKR Muovi managing director Juha Koivisto, who was involved in the development of the device.

According to Koivisto, the designing of the device was a very pleasant project and cooperation with Kiilto went very well.

“The design work proceeded rapidly on account of the coronavirus, and we completed the present version of the device in three weeks during the pandemic”, Koivisto says.

Dispensing hand disinfectant from the device is easy. It can be approached from both sides, and thanks to the infrared detection technology the user does not have to touch the device.

It has one ten-litre or two five-litre disinfectant holders, so the disinfectant will last a long time even with intensive use. As the appliance needs to be filled less often, good security of supply is ensured. The dispenser can also be used outdoors with an industrial battery that operates on a single charge for several days.

During the spring and summer, 25 of the devices were tested in the pilot phase, and based on this the dispenser is now being launched on the market. The solution has attracted interest in many other countries as well.

The first user of the SafePoint+ hand disinfectant dispenser in Finland is the K-Supermarket in Vihti. According to the shopkeeper, Timo Laukkanen, both customers and the shop staff have been very satisfied with the device. News of it spread widely through the store’s Facebook page.

“Competitors have also come to see the dispenser, and it has attracted widespread interest”, Laukkanen says.

Customer feedback has been positive, in particular because there is no need to touch the device itself when using it.

“Many people have also asked where we got the dispenser from. People have also been pleased with the fact that the double-sided device can be used equally well when going into the supermarket and on the way out”, Laukkanen adds.

He is also impressed with the ease of use of the device. Due to the large disinfectant holder, it does not need to be refilled often. According to Laukkanen, changing the holder is also hassle-free. In addition, the device is easy to maintain and operates on AC power. He also appreciates the fact that the dispenser is Finnish-made and is manufactured ecologically.

“We haven’t had any problems with it. And it is certainly needed for the coming flu season.”