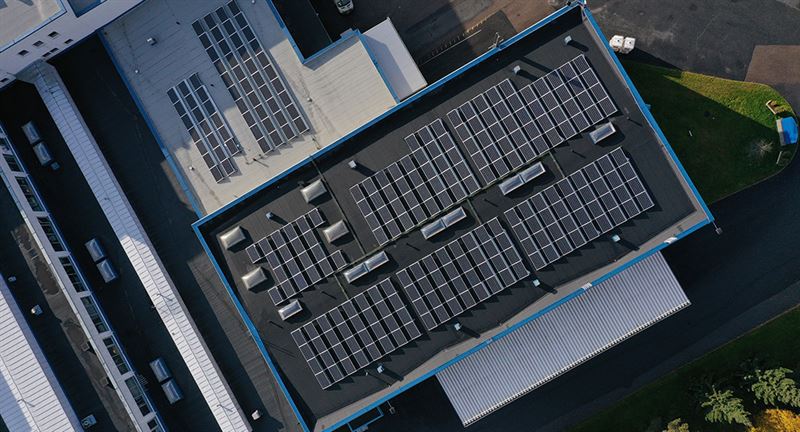 Towards a carbon-neutral future

As part of its Promise to the Environment, Kiilto has set a highly ambitious goal for the use of green energy – our activities will be carbon balanced by 2028. Kiilto has taken major strides towards this goal over the last two years.

EHS Manager Lauri Sainio points out that the changes made will not fully feed through to the figures until the following year, but good news is already coming in.

This has been achieved by making significant changes in various production facilities.

A hybrid system using waste heat and geothermal energy from the polymerisation process was introduced in Lempäälä in 2018. The system was later extended, to utilise the waste heat from the melt adhesive process, and the geothermal system was scaled up. The production facility’s building automation was also modernised, which helped to improve the plant’s energy-efficiency.

“At the turn of last year, a massive solar power plant was commissioned in Lempäälä, replacing the previous solar power plant. The system covers approximately 15% of the plant’s energy consumption. Some of the old panels were moved to the Vantaa warehouse, where they will be commissioned this year,” says Sainio.

A solar power plant, also covering around 15% of the plant’s energy consumption, was commissioned at the Hankasalmi plant in 2018. In addition, the previously installed air-to-water heat pump system was expanded. New air compressors were acquired to improve energy efficiency at the Turku production plant.

“By adding new carbon sinks, Kiilto can compensate for any residual carbon footprint it leaves. However, the priority of its carbon-neutrality goal is genuine reduction of emissions,” states Sainio.

Kiilto plans to achieve its objectives by further improving the energy efficiency of production sites and making broader use of various types of renewable energy.

It will take the following concrete steps at its Hankasalmi and Turku production plants.

“For heating, Hankasalmi has used small amounts of fuel oil alongside its air-to-water heat pump system. The intention is to introduce a geothermal system, which will completely eliminate the use of fuel oil, by the end of the year.”

Solar power will also be introduced at the Turku plant.

The chemical industry aims to achieve carbon neutrality in Finland by 2045. Sainio says that Kiilto’s target for 2028 is ambitious — this is one of the toughest schedules among the carbon-neutral promises made by industrial firms. “However, since the chemical industry is targeting 2045, individual companies must have stricter targets to ensure that the sector meets its overall objective. Companies must therefore have ambitious goals and schedules.”

September 2015
An air-to-water heat pump system is commissioned at the Hankasalmi production plant.

April 2018
The Promise to the Environment is declared

August 2018
A hybrid system using waste heat and geothermal energy from the polymerisation process is introduced in Lempäälä.
A 70kWp (60Mwh) solar power plant is opened at the Hankasalmi production plant.
The air-to-water heat pump system at Hankasalmi is expanded.

August 2019
The Lempäälä hybrid system is scaled up to use waste heat from the melt adhesive process, alongside the expansion of geothermal heat.

January–February 2020
A 1Wp (800Mwh) solar power plant is opened at the Lempäälä plant.
Commissioning of a steam boiler at the Turku production plant.

December 2020
A geothermal system is commissioned at the Hankasalmi production plant.

2021–2028
Identification and implementation of additional measures to reduce fossil fuel utilisation, and the wider use of renewable energy.

Want to hear more about our Promise to the Environment? Order the latest news!