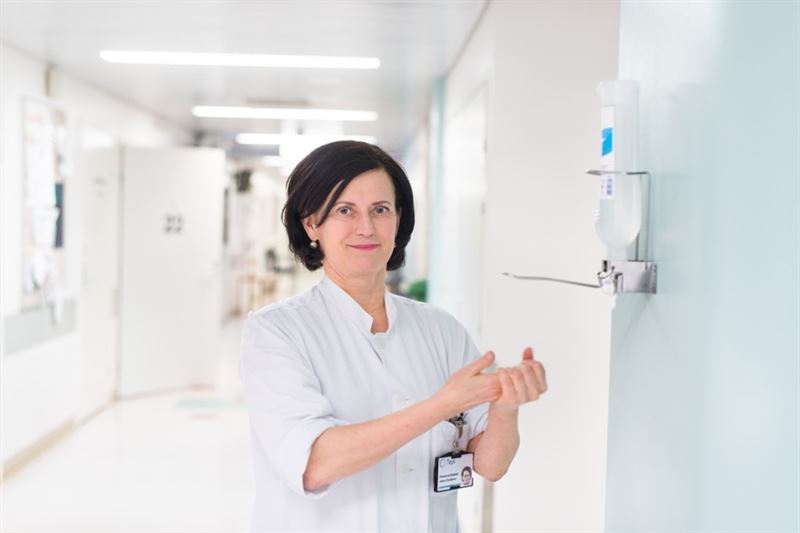 Where does the development of a new product start? Sometimes it starts with a customer initiative. In spring 2013, Jaana Syrjänen, Chief Physician of the Infections Unit at the Tampere University Hospital (TAYS), described the needs of her unit in a meeting with Kiilto.

“I said that you have this Erisept Foam, which has been in a convenient form for the user – could we get something similar with chlorhexidine?” Syrjänen says.

For over a decade, the Pirkanmaa region has had a very high incidence of the MRSA bacteria compared to the rest of the country. MRSA is a type of bacteria resistant to methicillin antibiotics, which may cause infections that cannot be treated with normal antibiotics.

There is no one way to beat hospital-acquired infections.

“It is vital to practise diligent hand hygiene and wear appropriate personal protective equipment with all patients. MRSA cases are reported to the management, staff members are trained and the hospital strives to have sufficient staffing. Each ward has a designated nurse who specialises in hygiene and serves as the ward’s special expert and contact person with the hygiene unit,” says Syrjänen.

“The essential thing is that the management and staff commit to the activities which, in practice, comprise taking good care of the patient. In addition, it naturally also helps prevent other infections.

“We take contact precautions in the treatment of all known carriers, and we also give them decolonisation treatment which uses chlorhexidine-based skin cleansing liquid and a nasal antibiotic ointment,” says Syrjänen.

Chlorhexidine is an antiseptic, and there have been good experiences with its use in MRSA prevention.

“A few years ago, we wanted to find a feasible chlorhexidine-based washing liquid. It turned out that the strength of existing products was not appropriate and that the packages were not practical for the user.”

And so Jaana Syrjänen told Kiilto what she needed. Over the years, the Infections Unit has cooperated with Kiilto in many ways and the personnel of the unit feel that their improvement suggestions and comments have been carefully considered at Kiilto.

“The fact that Kiilto is Finnish was also relevant. Would a multinational corporation have been interested in manufacturing a product with such limited applications?” says Syrjänen.

A chlorhexidine washing liquid only needed under special circumstances is not exactly a product with a big market. Kiilto realised from the start that this would not be a commercial project but rather a way to take responsibility for hospital hygiene.

“Kiilto started driving it forward. There were people involved who had an idea about the product’s safety and information about its allergens, for example. All aspects were rigorously analysed.”

Hospital hygiene products must have proven as well as tried and tested efficacy and usability. Safety also plays a very important role: markings and instructions must be precise. After two years of product development work, a chlorhexidine-based antiseptic washing foam was launched under the product name Erisept CHG.

“Now we have a product that we can safely give to MRSA patients and tell them that here is your soap, use it when you shower,” says Syrjänen.

The many different approaches to defeating the MRSA bacterium seem to be working: over the last three years, the number of new cases has clearly decreased.